Three chances to sac my queen in chess

Anyway. It wasn't a very good game, but it was much more instructive than if I'd done what I was supposed to and won it quickly. Let's look at the start.


Black hasn't bothered to get his knights out. Now, I remembered Legal's Mate, but I also remembered that if you did it wrong, you just went down a piece and were kind of in big trouble and your coach and teammates probably thought,  gee, what the heck were you doing? (Note: this sort of thing can get in your way with general creativity. There are things to check off on. But it's a legitimate fear, and one that needs to be dealt with.) 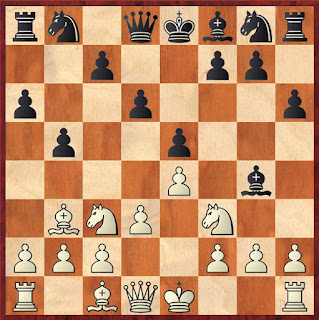 The right move, here, is 7. Nxe5! because of Bxd1 Bxf7+ Ke7 Nxd5#. And it's a weird thing, here. Every chess player dreams of sacrificing a queen for a quick win. But I remember talking myself out of it: well, it's not an ORIGINAL sacrifice. Well, I'll feel dumb if I get it wrong. And I don't know when it happened, but at some point, I stopped trying for cool stuff and started grinding out wins. I was still a pretty aggressive player at this point, but...well, not this game.

7. h3 7... Bxf3 8. Qxf3 Qf6 9. Qxf6? Now I still had a big advantage, and Qe2 or Qg3 keeps queens on the board and also still threatens the annoying Nd5. So I am letting him off the hook and letting him get his knight in the game. Even an immediate Nd5 is rather good, but I don't know--I think I was learning about endgames and so tried to steer the game that way.

Now I learned a lot from this game, with the endgame small advantages etc. And overall, it was favorable, though being exhausted may've cost me in the next two rounds. I got a bad position in round 2 then lost a tricky (but again instructional) game in round 3. So, yeah, I remember missing my chance. I remember fearing my (kind of sarcastic) chess coach saying "Mi-i-i-ster Schu-u-u-ltz! What took so long?" and also fearing him asking about why I didn't play Nxe5. The thing was...it's something I wished I'd nailed down. But I sort of let my fears trap me. And I didn't really do much after that.

And so I remember this when I think about missing chances or not going with what I know or intimidating myself into going for the safe route without checking off. But the story doesn't end sadly.

I eventually did get my queen sacrifice later. It was actually a sham sacrifice--in other words, I got the material back quickly. But then a month later I had a chance for the real thing, and I took it, and it was glorious. It was a positional sacrifice! The guy next to me said he was glad I had the guts to play it! The end of the game was ridiculous--I pitched a bishop in a winning position, then my opponent pitched a rook. But--I got my queen sacrifice, and it was my own. Let's not worry about the opening play too much.

The sham sacrifice is below. In this game I went up a pawn then my opponent won an exchange for a pawn, but I had two passed queenside pawns, so I won material back. 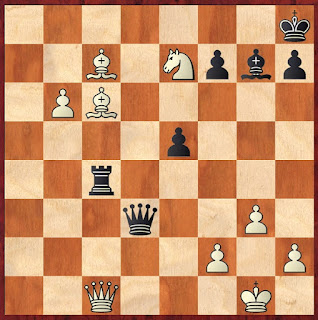 I remember this when I talk myself out of something good, or if I think I might be about to. It's a good way to check off. You never know when good fortune is going to happen--but it occurs to me I never gave myself a chance to make another queen sac. I just didn't play aggressively enough. Well, there was 1. e4 c5 2. c3 d6 3. d4 cxd4 4. cxd4 Nf6 5. Nc3 Nc6 6. Nf3 Bg4?! 7. e5 Ne5 8. Nxe5! but that doesn't really count (Bb5+ gets it back.) Still, you take what you can. The only reason I'd return to tournament chess is to get one more queen sac. That'd mean playing aggressively, with confidence, and so forth, and not second guessing, but having fun calculating to make sure of things.
Posted by Andrew at 8:48 PM